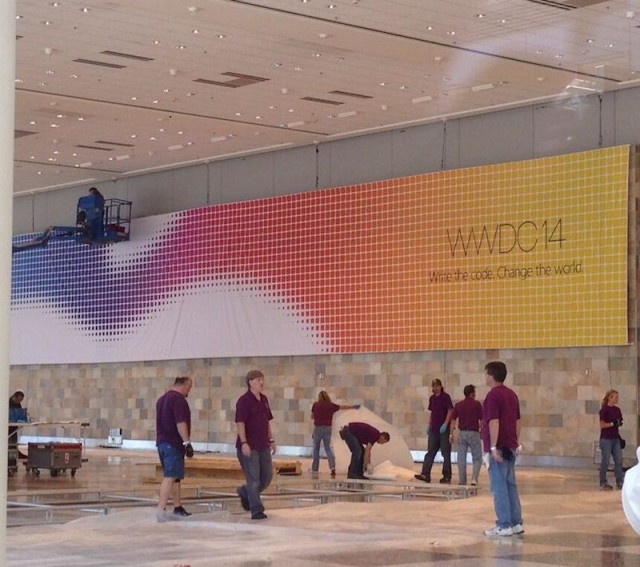 It seems like this WWDC was a disappointment for consumers. Major predictions, iWatch and a thinner 12-inch MacBook Air did not confirm. Minor stuff: Air becoming more power efficient and cheaper, iPad Air getting the fingerprint scanner. The new “best OSX and iOS we’ve ever made” and so on. Everyone expects a new category-defining product from Apple, but instead we got iterations of existing products.

However, developers still don’t know what to think of the “Objective”. Craig Federighi presented it very quickly, without particular emphasis. It will first be available in Xcode 6.0 “later this Autumn”. It is still not clear, whether it is a replacement for Apple Script, Automator, or Objective-C.

Here is the hello-world example, transcribed from the keynote slides.

And now, the “Objective” version:

This seems to be readable for anyone who knows a little bit of Objective-C.

One thing is clear: there are no type annotations. As Federighi mentioned, every object is assumed to be of type id in Objective-C sense.

On Mac there will be an option between Automatic Reference Counting (ARC) with and without cycle resolution. On iOS the only option is without.

It is said that there is no performance penalty (assuming cycle resulution is turned off), as long as you are using Objective-C APIs and not C or C++ APIs.

Right now Objective does not seem like a radical change comparing to its C-counterpart, only a syntactic one. However, it could help Apple attract more developers from the mainstream dynamic languages camp. Even more likely, it is just a first shy step towards improving the language for Apple’s platforms.

Apple is trying to clean-up the language by removing the “C” from Objective-C. Many developers already use what is commonly known as the id subset of Objective-C (one where you use id for all the types), and Apple is only formalizing and promoting this subset by providing a more appropriate syntax for it.

As you probably know, Objective-C is the child of Smalltalk and C programming languages. By removing “C” from Objective-C, Apple is effectively created a new Smalltalk dialect. However, it is doubtfull that Apple will be bold enough to bring more advanced features of Smalltalk, such as Smalltalk code-browser, persisting a running system in an image, or continuations.

There is a bit of controversy regarding the name “Objective”. As it turns out, there already exists a language called Objective-Smalltalk. This situation reminds of a Google Go language issue.

Also, it is impossible not to mentioned another two projects that allow you to write software for Apple’s platforms in a Smalltalk-related languages: F-Script and RubyMotion.

Time will tell us whether Objective is going to be Apple’s new flagship programming language, or if it is going to be a short-lived experiment like MacRuby. In any way, I am extremely excited to see a Smalltalk dialect introduced and promoted by Apple.

Amazing how it all went full circle: from Steve Jobs being introduced to the Smalltalk-80 system at Xerox PARC, to NeXT betting on Objective-C, then Apple evolving it by re-introducing blocks from Smalltalk, and now introducing Objective, which is indistinguishable from Smalltalk. ■