Usually, x86 tutorials don’t spend much time explaining the historical perspective of design and naming decisions. When learning x86 assembly, you’re usually told something along the lines: Here’s EAX. It’s a register. Use it.

So, what exactly do those letters stand for? E–A–X.

In 1972, after an odd sequence of events, Intel introduced the world’s first 8-bit microprocessor, the 8008. Back then, Intel was primarily a vendor of memory chips. The 8008 was commissioned by the Computer Terminal Corporation (CTC) for their new Datapoint 2200 programmable terminal. But the chip was delayed and did not meet CTC expectations. So Intel added a few general-purpose instructions to it and marketed the chip to other customers.

A stood for accumulator, which was an implicit operand and return value of the arithmetic and logical operations.

You might think—gee, seven is a very odd number of registers—and would be right! The registers were encoded as three bits of the instruction, so it allowed for eight combinations. The last one was for a pseudo-register called M. It stood for memory. M referred to the memory location pointed by the combination of registers H and L. H stood for high-order byte, while L stood for low-order byte of the memory address. That was the only available way to reference memory in 8008.

So, A was an accumulator, H and L were also used for addressing memory. However, B, C, D, E were completely generic and interchangeable.

To leverage its existing customer base, Intel made 8086 software-compatible down to 8008. A simple translator program would translate from 8008 assembly to 8086 assembly. For that to work well, 8086 instruction set architecture had to map well to 8008, inheriting many design decisions.

As you can see from the figure above, data in the first four 16-bit registers could also be accessed by one of the eight 8-bit registers.

AX was a 16-bit accumulator, while AH and AL could be thought of as 8-bit registers on their own or as a way to access the high-order and the low-order bytes of AX.

The X in AX meant to be a placeholder that stood for both H and L.

Since 8008 had seven 8-bit registers, they could be mapped well to the eight 8086 registers, with one to spare.

The M pseudo-register was not needed anymore since 8086 allowed for many memory addressing modes. Hence, it freed an encoding for an additional register.

In the following figure you can see how exactly the 8008 registers were mapped to the 8086 ones:

Even though many arithmetic and logical operations could work on any of these registers, none of the registers were truly generic at this point. Each had some instructions introduced that worked for one of the registers but didn’t work for others. The mnemonics are: BX is base register, CX is count register, DX is data register, and AX is still the accumulator.

The new SP is stack pointer, BP is base pointer, SI is source index, DI is destination index. But we won’t go into details about them here.

8086 also introduced the segment registers, but they were very much a separate beast. Segmented architecture deserves a story on its own, as it is the result of maintaining backward-compatibility with 8080.

Many new features were introduced, but 80386 continued to be (mostly) binary-compatible down to 8086.

The main registers were extended to 32 bits by adding an E prefix:

EAX stood for extended AX. And AX now refers to the lower half of EAX, while AH and AL continue to refer to the two AX bytes.

And that’s how EAX got its name.

But wait, there’s more to the story!

In 2003 AMD effectively takes over the architectural leadership and introduces the first 64-bit processor in the x86 lineage. In legacy mode, it is backward-compatible down to 8086.

The eight main registers are extended to 64 bits.

The extended registers get an R prefix that replaces the E prefix. So the accumulator is now referred to as RAX:

Well, AMD wanted to streamline the register handling. They introduced eight new registers called R8 to R15. They even discussed calling the extensions of the existing eight registers as R0 to R7. But they recognized that many instructions have mnemonics that refer to one of the register letters like A or B. So they kept the original names, replacing E with R. That also provided at least some consistency with the new R8–R15.

So R in RAX stood for register, and was a way to unify the naming to be more consistent with the new R8–R15 registers.

The new registers also got their “narrow” versions. Take R15, for example:

An earlier version of this blog post stated that the X in AX stood for eXtended.

Some of you pointed out that this was not quite right and that the X stood, in a way, for “pair.” I must admit that, unlike for the rest of the article, I couldn’t find a reference that authoritatively described the meaning of X. So, I decided to reach out to Dr. Stephen Morse, the architect of 8086.

With his permission, I include the response:

Your question is certainly pushing my memory about decisions that were made over 40 years ago. So the following is the best of my recollection and not necessarily 100% accurate.

Prior to the 8086 the registers were single letters, e.g., A, B, C, D. Each was an 8-bit register. The 8086 had 16-bit registers that could be referenced either 8-bits at a time or all 16-bits at once. For example, we could reference the 8 high-order bits of the A register, the 8 low-order bits of the A register, or the entire 16 bits of the A register. The nomenclature of the first two were chosen to be AL and AH, where the L/H designated the low-order or the high order half. Now we needed a term to designate the full 16 bits. So the letter X was selected. The X was simply an arbitrary letter that combined both L and H – sort of like the use of X in algebra to designate the unknown. There really wasn’t that much thought given as to what X stood for (if anything) – it was just a letter that was needed to identify the General Registers (AX, BX, CX, DX), as opposed to the Pointer and Index Registers (SP, BP, SI, DI), and the Segment Registers (CS, DS, ES, SS).

If you liked this blog post, check out my book,
Compiling to Assembly from Scratch: 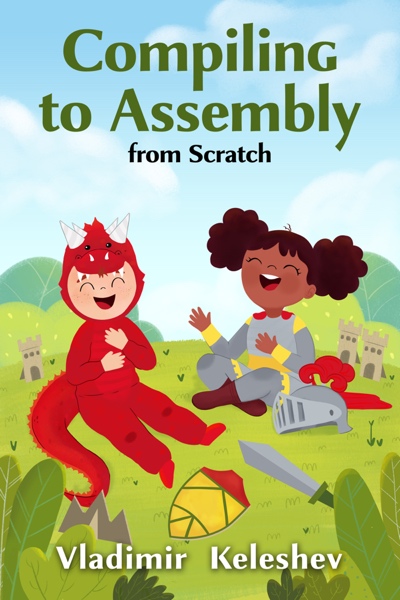